This webinar took place Feb. 12, 2022, on the 43rd Anniversary of the Islamic Revolution, and celebrates the release of the Farsi Translation of Arnold August’s Cuba-US Relations: Obama and Beyond.

Every February 11-12 since the 1979 Islamic Revolution is a cause to celebrate. However, this past year is special. In 2021, and already into 2022, the world has witnessed a virtual unprecedented surge in multipolar collaboration stretching from Western Asia, through the Middle East, Asia, Africa and Latin America. Cuba, Iran, and countries like Venezuela and beyond stand as increasingly solid bases in pursuing planetary pluripolarity against the ongoing attempt of the US and its allies to maintain its global hegemony over the world.

Coinciding with the 43rd anniversary of the Islamic Revolution, this webinar is the international launch of the Farsi translation of Arnold August’s Cuba-US Relations: Obama and Beyond. The International Manifesto Group invites you to attend the Webinar and join the discussion.

The 2017 publication of Arnold August’s book “Cuba-US Relations: Obama and Beyond” was followed with its updated 2018 Cuban version in Spanish. It was adapted to take into account the Trump mandate with a new title: “Cuba-US Relations: What has Changed?” This was meant to take into account the fact that nothing has changed with Trump reverting to the US’s traditional hostile attitude camouflaged momentarily by the Obama “thaw.” Ironically, the Obama anointed Biden presidency also shows that “nothing has changed.” The 2021 Iranian version of the book in turn was further adapted with a Preface by the author and its pages honoured by an Epilogue written by one of Cuba’s most prestigious author and journalist, Luis Toledo Sande. Both the Preface and Epilogue delve into the current international geopolitics.

Both the Preface and the Epilogue in English are now available as resources for discussion during the webinar. Find them here. For Farsi-speaking people, the Iranian version is available here.

This event is sponsored by the International Manifesto Group, the U.S. Peace Council, and The Black Alliance for Peace. The official Media Sponsor is The Canada Files.

Ali Abutalebi: Born in Tehran, Iran, 1977. Executive Director of Mazmoon Books since 2005 that published, among others, “Who Killed Che” by Michael Ratner and Michael Steven Smith, and “Cuba-US Relations” by Arnold August. Lives in the US since 2017. Founder of Iranian Campaign for Solidarity with Cuba. Graduated in Engineering Administration from Payame Noor University. Collaborator with Urban Economy Forum as an independent researcher. Author of several articles for the Iranian press and political websites, mostly focused on Latin America progressive movements. Published a book on Cuba titled “Rest in Peace Ernesto.”

Mohammad Ghorbani: Translator of books from English to Farci including “Who Killed Che” by Michael Ratner and Michael Steven Smith and “Cuba US Relations” by Arnold August. Has written many articles on progressive Latin American and ALBA countries. A peace, justice, and anti-war activist. Pro working people and defender of independence of nations, in favour of anti imperialist multi polarisation. Supporter of Iranian Revolution of 1979 with its progressive Islamic characteristics and the role it plays in the region.

Ali Yerevani: Political editor of Fire This Time newspaper and Battle of Ideas Press in Canada. He has been a social justice activist since 1971, while in high school in Iran during the despotic regime of Mohammad Reza Shah Pahlavi. He was a participant in the 1979 Iranian Revolution. Since 1984 he has been organizing for social justice causes in Europe, the U.S., and Canada. In Europe, he was an organizer of the Nelson Mandela defence campaign. In Canada, he has been a founder of Mobilization Against War and Occupation, Free the Cuban 5 Committee-Vancouver, Palestine Solidarity Group, Vancouver Communities in Solidarity with Cuba, Iranian Community Against War, Battle of Ideas Press, Fire This Time Movement for Social Justice, Vancouver International Che Guevara Conference and many other social justice organizations.

Bahman Azad: An Iranian-American peace activist who has been involved in the struggle for peace and justice in the US and around the world since the 1970s. He is a retired professor of Sociology and Economics with a Doctoral degree in Sociology and a Master’s degree in Economics, a representative of the World Peace Council at the United Nations, and a member of the Administrative Committee of the United National Antiwar Coalition (UNAC). He was also serving as Co-Chair of Venezuelan Embassy Protectors Defense Committee (Washington DC; Coordinator of the Coalition Against U.S. Foreign Military Bases and the Global Campaign Against US/NATO Military Bases; Co-Coordinator of the Hands-Off Syria Coalition, and the People’s Mobilization; Chair of the Iran Working Group of Veterans For Peace. His area of research includes the political economy of Capitalism and Socialism, and his articles on this subject have appeared in such journals as Political Affairs, and Nature, Society and Thought. He is the author of the book: Heroic Struggle, Bitter Defeat: Factors Contributing to the Dismantling of the Socialist State in the USSR, published by International Publishers, New York.

Abdolhamid Shahrabi: Education: Political Science, Business Administration. Political & Cultural Activities. From 1970 to 1979 as a political activist in exile (US) fighting against the Shah’s repressive regime. During this period, contributed as a writer to Students’ Message, a weekly magazine in Farsi. In the same period, also acted as an organizer of the Committee for Artistic and Intellectual Freedom in Iran (CAIFI). CAIFI launched a broad successful campaign in defense of the Shah’s political prisoners, involving reputable figures in US anti-war movement and resulting in freedom for a number of those detained. 1984 – 1990: Manager of Solidarity Publications, having published, for example, Fidel Speaks, Fidel and Religion, Venezuelan Revolution: Dialogue of Marta Harnecker with Hugo Chavez and Nicaraguan Revolution: Sandinistas Speak. From 2007 to present is Co-founder and Research Director at the House of Latin America (HOLA) based in Iran. HOLA has been involved in activities aimed at deepening solidarity between the peoples of Latin America and Iran and it has been focused on promoting the achievements of liberation movements in the countries of ALBA. In 2021, he received the Cuban Friendship Medal awarded by the Cuban Council of State.

Tim Anderson: Has degrees in economics and international politics, and a doctorate on the political economy of economic liberalisation in Australia. He taught at Australian universities for more than 30 years. His most recent books are Land and Livelihoods in Papua New Guinea, The Dirty War on Syria (in 10 languages) and Axis of Resistance: Towards an Independent Middle East. He has been published in a range of academic journals, including: Health and Human Rights, the Pan-American Health Journal, The International Journal of Cuban Studies, the Australian Journal of Human Rights, Latin American Perspectives, the Journal of Iberian and Latin American Studies, the Portuguese Studies Review, Current Issues in Criminal Justice, the Australian Journal of Professional and Applied Ethics, Critical Public Health, the Journal of Australian Political Economy and Pacific Economic Bulletin. A consultant to the United Nations Development Programme (UNDP) on south-south cooperation and development strategy, he has written extensively on Cuban medical cooperation in Timor-Leste and the Southwest Pacific. In 2017, he was awarded the Cuban Friendship Medal granted by the Cuban Council of State on the proposal of the Cuban Institute of Friendship with the Peoples (ICAP).

Arnold August: Montreal-based author and journalist (MA Poli Sci, McGill University). Three books on Cuba: 1. The “ground-breaking” Democracy in Cuba and the 1997-98 Elections, 2. Cuba and Its Neighbours: Democracy in Motion, about which Fernando González Llort of the Cuban 5 & President of ICAP writes: “The chapter on democracy in the US is among the best critical analyses I have read; There are elements of the democratic functioning of Cuban society that even I myself had not noticed.” 3. Cuba-US Relations, according to Dan Kovalik “August is one of the foremost experts on Cuba & the 1959 Revolution.” Also a journalist, published in English, Spanish and French in North and South America, Europe, the Middle East and India. In 2013 won an award from the Cuban Union of Journalists. In 2017 was awarded the Cuban Friendship Medal by the Cuban Council of State on recommendation of ICAP. Collaborator with TeleSur, Cuban television & Press TV Iran.

Moderator – Radhika Desai: Professor at the Department of Political Studies, and Director, Geopolitical Economy Research Group, University of Manitoba, Winnipeg, Canada. She is the author of Geopolitical Economy: After US Hegemony, Globalization and Empire (2013), Slouching Towards Ayodhya: From Congress to Hindutva in Indian Politics (2nd rev ed, 2004) and Intellectuals and Socialism: ‘Social Democrats’ and the Labour Party (1994), a New Statesman and Society Book of the Month, and editor or co-editor of Russia, Ukraine and Contemporary Imperialism, a special issue of International Critical Thought (2016), Theoretical Engagements in Geopolitical Economy (2015), Analytical Gains from Geopolitical Economy (2015), Revitalizing Marxist Theory for Today’s Capitalism (2010) and Developmental and Cultural Nationalisms (2009). 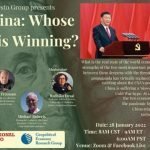 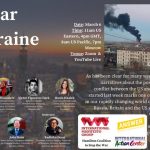